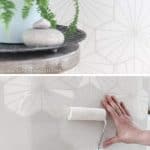 If you're looking for an alternative to wallpaper then wall stencils can be a quick and easy transformation for your home. Far cheaper than wallpaper, they can be re-used again and again. Recently, I used these modern wall stencils I found on Etsy to spruce up an otherwise boring corner of the loft. It was my first time using a wall stencil and I learned some things along the way - which was exactly what I was hoping for since this project was a pilot test for another, larger project that I have planned.

I've used my Affiliate links to link to the products used where possible. Clicking on the Affiliate Links means that if you make a purchase through one of these links, I may receive a small commission. There is no additional cost to yourself, however, it helps towards the costs of running this blog.  If you'd like to read my full disclosure, you can find it here: 'DISCLOSURE POLICY'

I've been wanting to stencil one of the walls in our lounge but since I've never used a wall stencil before, I was afraid I'd make a mess of it. Then I thought, “Well, you know what? If it turns out all wonky, just paint over it and it's gone!” So, off to Etsy I went and that was probably the hardest part of this project – have you ever looked on Etsy for wall stencils? There are so many stencils in all shapes, sizes and patterns, how on earth do you make a choice? In the end, I fell in love with the modern geometric style wall stencils from Dizzy Duck Designs. You just have to see this shop! It is full to the brim of gorgeous stencils and their photos are amazing too! Even if you've never thought of using a stencil in your home, one look at this shop and I guarantee, you'll be scouring your house looking for a likely spot to use one!

Two for the price of one

The stencil I chose is actually a floor stencil but to be honest, a stencil is a stencil is a stencil – in other words, it's up to you where you use it. The stencil comes in two parts. Apart from the main design, you get a smaller piece of the pattern too. When I bought mine last year there was a 'two for one' offer and at the time of writing this post, the offer is still valid. So, if you order one, you receive two of the same design. Now, you may be thinking, what's the point of that? Well, let me tell you, having two stencils makes the work go much, much, quicker. You can alternate which stencil you use so that one dries (at least it does if you use chalk paint as I did) whilst you are using the other and you don't have to wash them as often. In fact, I washed mine only once during this project.

The stencil turned up safe and sound inside a hard cardboard tube and I was pleased to see that Dizzy Duck Designs had included a set of instructions to make the process easier for first-timers like me.

For my practice surface, I chose the chimney breast in our loft. This room is our version of Harry Potter's 'Room of Requirements' meaning it transforms from guest room to craft room to photography or film set, depending on who's staying over or what's going on in our house at the time. The chimney breast in this room is quite small so I knew it would be a quick project and there would be just enough space to give me a feel for using the stencil and an idea of which tools would work best with the chalk paint. 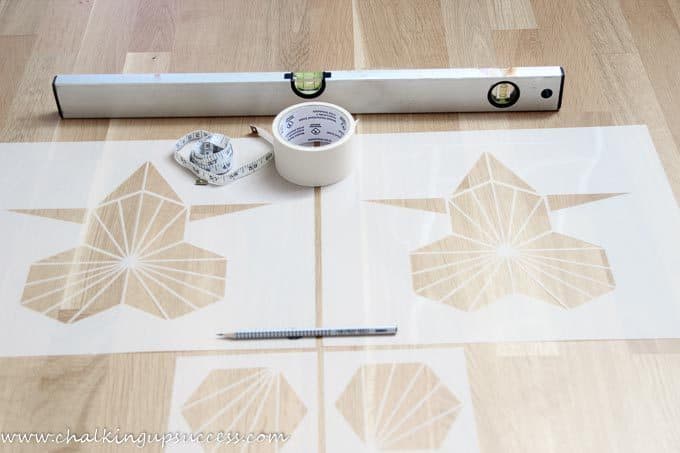 Tools for working with wall stencils

The chimney breast is quite narrow and I wanted to make sure that I started with the pattern in the middle of the wall. I measured the wall and marked the middle and did the same with the stencil (or so I thought). If you look at the finished wall, you will see that the pattern is not at all in the centre of the wall. Luckily, because of the geometric pattern, you don't notice it at all – at least no-one has so far and if they did, they were too polite to say, ha! See, this was the reason I wanted to do a test, before attempting the wall in the lounge! 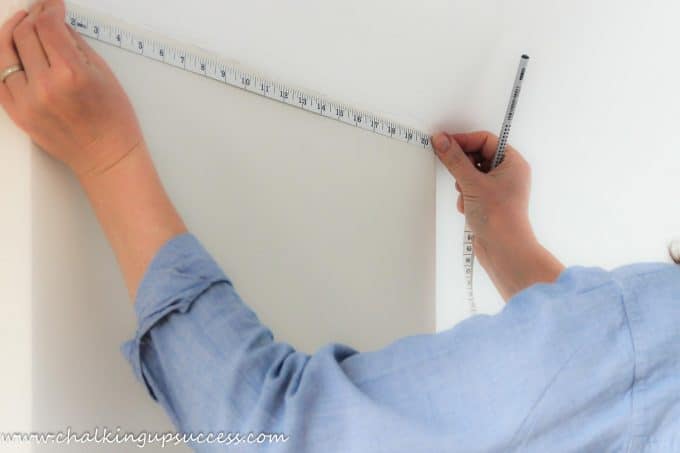 Making sure the stencil is level 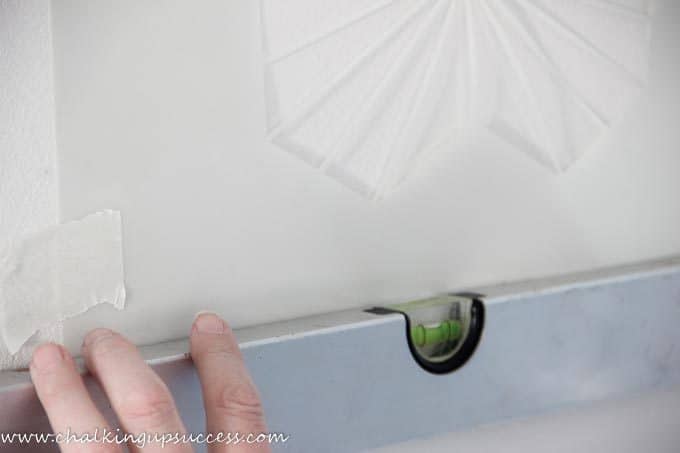 It's always important to make sure that the stencil is level before starting to paint and the best way to do that is to use a spirit level. I made sure the bottom edge of the stencil was level before using the masking tape to tape it to the wall. I used the spirit level again when I got to the middle of the wall and towards the bottom just to be sure I was still on track.

Roller or brush or both?

If you look at this stencil, you will see that it has quite narrow cut-outs in the pattern. I opted to use a paint roller for painting because I thought it would be gentler on the stencil and help stop the paint from bleeding underneath those narrow cut-outs. This worked really well when I was using the large stencil but when I got to the edges and had to switch to the smaller stencil things got a little bit tricky. At first, I tried to use the roller for this too but because the roof is slanted above the chimney breast, it was really hard to keep the stencil flat to the wall. 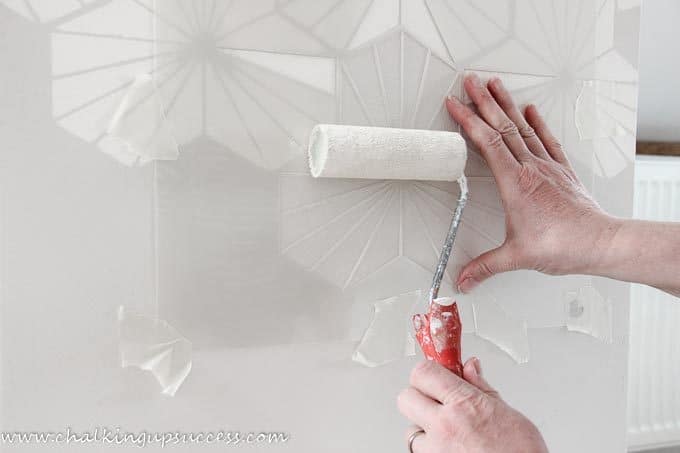 That's when I switched over to a medium sized stencil brush like this one. 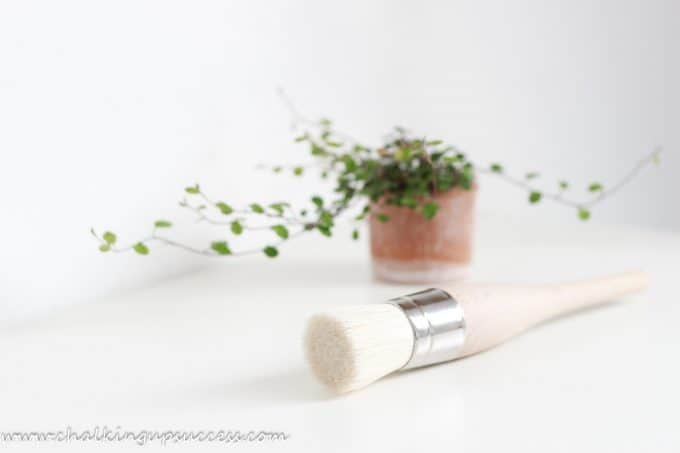 You can find lots of lovely stencil brushes here.

After that, it was easy to fill in the rest of the gaps on the sides of the wall where the larger stencil didn't fit. I didn't get any shots of using the stencil brush because I didn't finish the whole wall until the day after I filmed. I'll be sure to remember to film that part when I do the whole thing again in the lounge.

The stencil has guides cut into it which makes it really easy to line up the pattern as you go – you can see that better in the video. 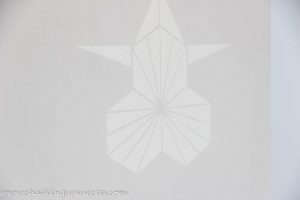 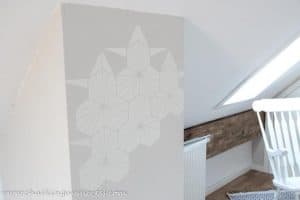 Even though it's not perfect, I think it looks great for a first attempt and I learned so much in the process. There are definitely a few things I will do differently when I paint the larger wall in the lounge but for now I'm happy with the progress I've made in the loft – at least the walls are not as boring as they were! 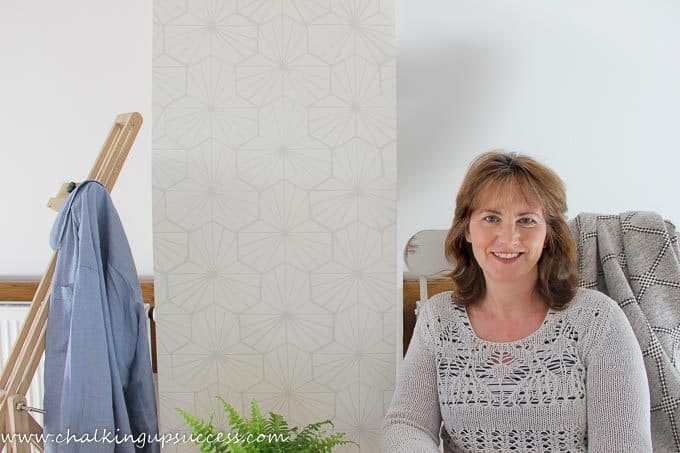 How about you, do you think wall stencilling may be something you'll try out? Or maybe you've already tried it and have some tips for me? Either way, I'd love to hear all about it in the comments below! 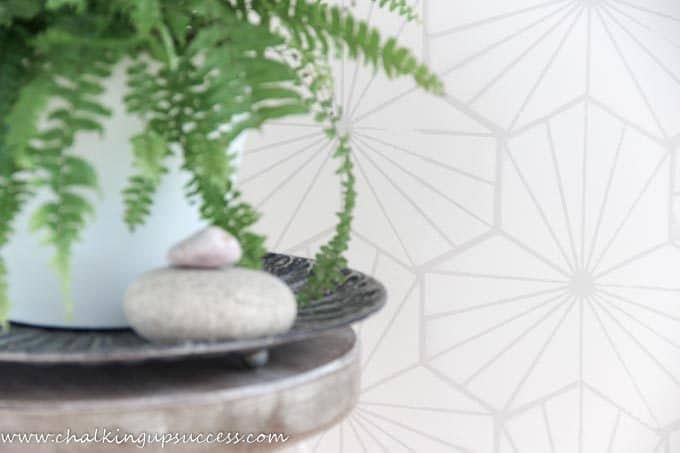 Here are a few other posts you may like:

How to organize a small under stairs pantry

How to make and stencil a giant paper bag

How to paint & stencil furniture with chalk paint 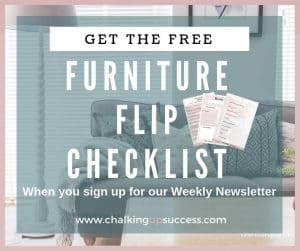 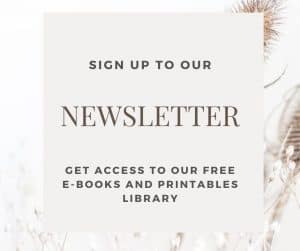